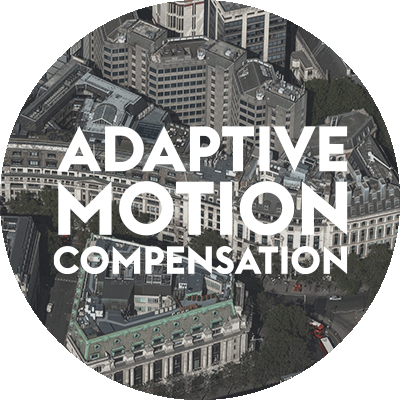 AMC is an innovative motion compensation approach that in addition to correcting image blur in the direction of flight (the so-called Forward Motion Compensation or FMC) also addresses blur caused by multi-directional camera movements during the flight.

The operating principle is based on using high frequency inertial measurement Unit (IMU) data to record the camera movement during the exposure.

This information is used in a non-blind deconvolution algorithm to calculate a filter kernel which removes the motion inducted image blur, regardless of its direction.

Compared to mechanical FMC implementations, a software-based approach also has the advantage that no moving parts are needed and thus no abrasion exists.

With the introduction of Adaptive Motion Compensation, Vexcel imaging is starting a new chapter in motion compensation. Utilizing this innovative method to successfully compensate for multi-directional motion is a game changer for the industry.

Curious? Don’t hesitate to reach out to Vexcel’s Sales Team.