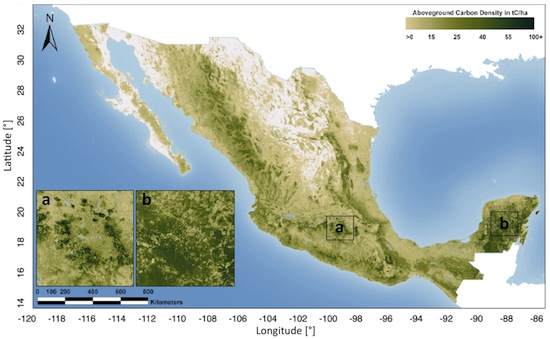 The Woods Hole Research Center (WHRC) and Allianza MREDD+ released the first detailed map of aboveground forest carbon stocks of Mexico available for download. This carbon stock inventory is very valuable for Mexico, as one of the first tropical nations to voluntarily pledge to mitigation actions within the context of the United Nation’s Reducing Emissions from Deforestation and forest Degradation (REDD+)program.

The hectare-scale map is the result of a collaboration led by WHRC scientists Josef Kellndorfer and Oliver Cartus with Mexico’s National Forestry Commission (CONAFOR) and the Mexican Norway Project (MNP) to provide a tool for the national government to enhance a robust Measurement, Reporting and Verification (MRV) system for national carbon emissions.

“The release of this data set is an important step forward in the accounting for carbon flux in Mexico and in supporting efforts to reduce carbon emissions from the land sector,” says Dr. Kellndorfer. “We see the potential for these biomass data sets to be generated by other tropical nations.”

The fusion of these three datasets allows for continuous estimates of carbon stocks where field data are missing even for those classes not very well represented in the national forest inventory. The team is currently testing airborne lidar data in a range of Mexico’s ecosystems as an option to augment field observations with airborne and satellite data to improve carbon mapping for countries without detailed forest inventories.

Rane Cortez from The Nature Conservancy, Chief of Party of the Allianza MREDD+ states, “Mexico is quickly becoming a leader on REDD+ and can serve as a model for other countries. This biomass map and dataset represent one of the important advancements that Mexico has made in developing its national monitoring system and will help the country prioritize its strategies and investments for reducing emissions from deforestation.”

This work was made possible by USAID within the framework of Mexico’s REDD+ project, the Gordon and Betty Moore Foundation, Google.org, and the David and Lucille Packard Foundation. Partners include CONAFOR, MNP, NASA, the University of Maryland, the National Commission for Knowledge and Use of Biodiversity (CANABIO), the U.S. Forest Service, The Nature Conservancy, Rainforest Alliance, and Natural Areas and Sustainable Development (ENDESU).

The maps and findings were published as “A National, Detailed Map of Forest Aboveground Carbon Stocks in Mexico” in the journal Remote Sensing.