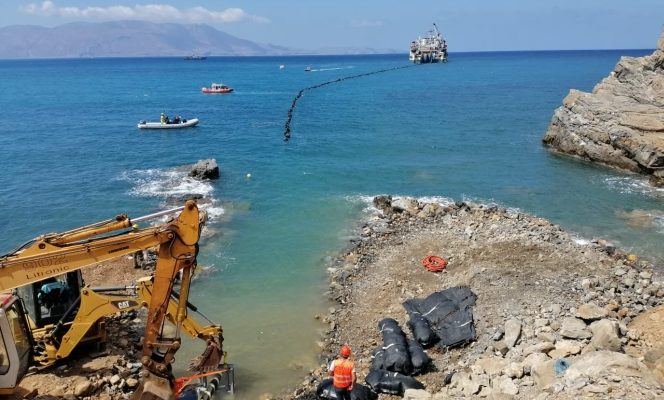 Linking the island of Crete to mainland Greece, the 174-kilometer-long interconnection, of which 132 kilometers are on the seabed, became fully functional last month. Connecting Megalopolis in central Peloponnese with Heraclion, the biggest city on the island, the cable is expected to meet more than a third of the island’s electrical power demand and enable the island to permanently close its most polluting power plants.

The European Union funded project, managed by Independent Power Transmission Operator (IPTO), selected AstroLabe Engineering to perform the survey. The land portion was a topographic survey stake-out of the center line and boundaries of the corridor to be trenched as well as a topographic record of the trench depth and exact cable location in the trench. The marine portion was marked using Differential Global Positioning System (DGPS), survey lines and markers with buoys close to shore on both the mainland and Crete. During backfilling an additional topographic survey recorded the profile of the installed cable.

Astrolabe reported the SP60 performed very well in all areas. Especially appreciated was its performance in areas with obstructions, including those adjacent to the steep slopes found in the landing areas. The versatility of the SP60 made for efficient work on land and sea. JGC Geoinformatics Systems, a Spectra Geospatial distributor, provided the SP60 and support services to Astrolabe.