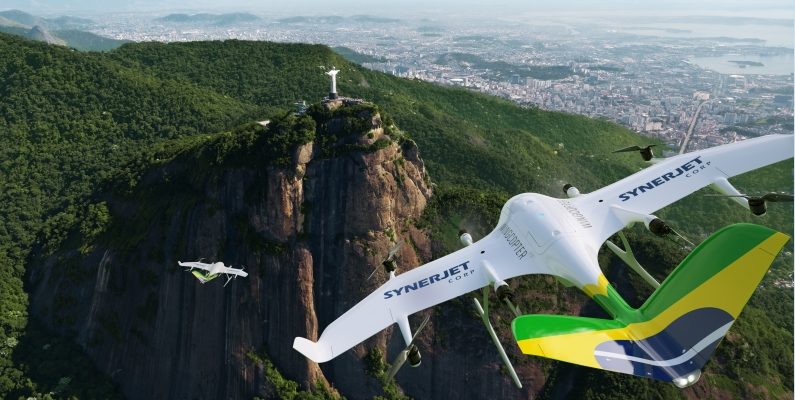 Leading delivery drone manufacturer Wingcopter and SYNERJET Corp announced the signing of a strategic partnership agreement. The agreement will allow the Latin American company to act as a distributor and local technical support provider for the Wingcopter 198, Wingcopter’s new flagship Unmanned Aircraft System (UAS), to customers in the region.

SYNERJET is one of the most respected companies in the field of business aviation on the continent, with operations in Brazil, Colombia, Ecuador, Chile, Panama, and Guatemala.

The agreement makes SYNERJET a member of the Wingcopter Authorized Partnership Program (WAPP) and a first mover on the continent in the fast-growing drone industry. With its vast and sparsely populated areas, Brazil and other South and Central American countries are perfectly suited for different drone delivery applications.

SYNERJET intends to provide drone operators, logistics companies, and providers in the healthcare industry with Wingcopter technology. With the WAPP, Wingcopter is establishing a global network of strategic partners.

The program allows drone operators, resellers, and agents all over the world to tap the full potential of drone delivery. At the same time, it enables Wingcopter to scale internationally fast and efficiently. Authorized Wingcopter Partners are trained and allowed to operate, promote, and distribute the world’s first triple-drop delivery drone, the Wingcopter 198, as well as receive early access to updates, upgrades, and new products.

“Getting SYNERJET on board as a very experienced and highly respected aviation company in Latin America is awesome. They will enable many drone operators to use fleets of Wingcopters in this part of the world. We experience a lot of interest in Wingcopter’s Authorized Partnership Program and in deploying the Wingcopter 198, as more and more companies understand the potential of drone deliveries.”

“We are delighted to be associated with Wingcopter in Latin America. This step represents an important milestone for us, one that is part of our vision of continued support to developing aviation in the region, reaching out to remote areas more efficiently, and selling and supporting the most suitable products available in the industry.”

“This partnership represents an exciting step on our mission to create logistical highways in the sky throughout the world, and we are very happy to take it together with SYNERJET. It is our first, but certainly not our last step in Latin America.”

Wingcopter is an award-winning German manufacturer and service provider of eVTOL, fixed-wing Unmanned Aircraft Systems (UAS) dedicated to improving and saving the lives of people worldwide through impactful commercial and humanitarian applications. The startup is focused on optimizing medical supply chains. In the future, Wingcopter will also deliver packages, tools and spare parts, as well as food and groceries. Thanks to its patented tilt-rotor mechanism, Wingcopter can take off and land vertically like a multicopter, while flying long distances as efficiently and quickly as a fixed-wing aircraft, even in rain and wind. In 2020, Wingcopter was named a Technology Pioneer by the World Economic Forum. Wingcopter’s investors include Xplorer Capital, Futury Regio Growth Fund, Futury Ventures, Hessen Kapital III, and Corecam Capital Partners.

SYNERJET CORP is a privately held Latin American aviation company, headquartered in Brazil, with main offices in Panama and Colombia, primarily selling and servicing business aircraft. SYNERJET CORP is the exclusive distributor for PILATUS AIRCRAFT in Latin America and CIRRUS AIRCRAFT in northern South America and Central America, also representing JETCRAFT in South America, besides being an avionics Premium Dealer for HONEYWELL and ENERCRAFT distributor in Brazil. The company also owns service centers in Brazil and Colombia and appointed satellite centers in Chile and Guatemala. SYNERJET was established in 2002 and has represented the most important airplane and helicopter OEM’s in multiple countries since its foundation.