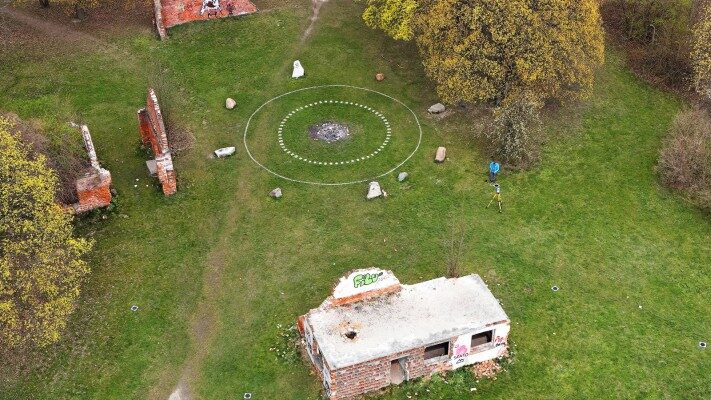 New advances in photogrammetry and LiDAR technology are bringing new workflows and functionalities to reconstruct reality in 3D. Whilst the rise of new smartphones including LiDAR sensors is an exciting development for terrestrial surveying, the sky is being unlocked with new, specialized hardware from 4G drones to powerful cameras. The P1 is a 45MP camera used by some professional photogrammetrists completing surveys with drones.

For typical large surveying projects, a drone is the better way to go. However, when just looking at a single site that needs a detailed survey, could the viDoc compete with an aerial drone survey?

NaviGate is a professional surveying and GIS company based in Poland that supply drones and drone mapping software. Their work in distributing specialized surveying software and hardware means they are experts in creating and providing accurate 3D models that are ready for use in construction, surveying, and more. They tested several different tools to create their own reference for how accurate the technology is. NaviGate’s team set out for a concrete bunker that was built in World War 1 that is partly demolished. They wanted to create 3D models of the site with multiple tools to compare workflows and the accuracy. This included comparing the Zenmuse P1 camera mounted on a DJI Matrice 300 RTK with the viDoc RTK rover.

The structure being surveyed is an old powder house on Swarog Hill in the region of Krakow. The structure was build and damaged in World War 1 in a sloped area with a gradient ranging from 5 to 7% in the surrounding land. It’s a one storey building with some plaster and clay blocks in its structure. The NaviGate team set out to collect data with a DJI Matrice 300 RTK (and P1 mounted), as well as with the viDoc RTK rover attached to an iPhone 12 Pro. The RTK datasets would be compared with a dataset from the XIAOMI 11 Lite to compare the accuracy with a non-RTK workflow.

To be sure of the accuracy of results, the NaviGate team first needed to gather a base dataset they would use as a reference. They gathered ground-based measurements with a GNSS receiver (Spectra Precision SP85). This was used to gather geolocation data and received corrections from the NTRIP service used on-site. The team also measured the coordinates of 15 precise points with a Focus 35 total station. The coordinates of these points would be compared with results generated by the drone and P1 dataset and viDoc dataset to test their accuracy.

Flying a drone to create a 3D model

The Zenmuse P1 camera is typically mounted on a DJI Matrice 300 RTK. This hardware can be used for aerial surveys for industries like construction (for example, tracking progress or measuring stockpiles with drones) or land and terrain surveys. The drone flew an area of 1.5 hectares with the smart oblique capture mode. The drone flew at a height of 80 meters and gathered images with RTK accuracy. The photos from the sensors were transferred via the SD card to a computer. The team were lucky and had optimal flight conditions with moderate cloud cover and a mild temperature of 15 degrees Celsius (59 degrees Fahrenheit). The final results included 110 RGB pictures that were exported as .tiff files. This data was processed with PIX4Dcloud, the online photogrammetry software.

The viDoc RTK rover is a handheld device that attaches onto select iOS and Android devices. During data collection with the free ground scanning app PIX4Dcatch, the viDoc tags images with RTK data via local NTRIP networks. As a result, data collected with the viDoc and PIX4Dcatch includes highly detailed photos that are tagged with RTK data to ensure centimeter accuracy. With select iOS devices, this workflow also includes LiDAR data which can be processed with Pix4D software (PIX4Dmatic even offers the option to merge iOS LiDAR data and photogrammetry into the same point cloud).

For this example, NaviGate used an iPhone 12 Pro, which has a LiDAR sensor built in. A surveyor holding the viDoc walked around the site in a clockwise motion, averaging 2 kilometers per hour. They scanned the outside of the structure before also scanning the ceiling in four lines moving from east to west. PIX4Dcatch has built-in live feedback that creates a 3D model as a user walks around a site that shows them the completion of their 3D model, ensuring there will be no gaps in the final dataset. The distance from the mobile device to an object averaged 3.5 meters. They gathered a total of 654 geotagged photos. Thanks to the native integration with the Pix4D workflow, the photos were automatically uploaded to PIX4Dcloud where processing began. The NaviGate team received an email notification with a link to the project on PIX4Dcloud when processing was complete.

To compare results, the XIAOMI 11 was also used to complete a terrestrial scan in the same style. The data was collected with PIX4Dcatch but the device was not attached to a viDoc, meaning that RTK data was not being gathered as well.

Desktop vs. cloud processing for photogrammetry

There are several options for processing photogrammetry datasets captured with drones or mobile devices. They can be done automatically via a cloud product such as PIX4Dcloud. The cloud app is run by Pix4D providers’ servers and therefore does not require powerful processing hardware on the part of the user.

However, if a user wants to have more control over the settings during processing or needs to maintain a desktop secure chain of custody over the data, as is the case for public safety operatives who are recreating crime scenes or accidents, then a desktop mapping software is a better option.

In this project, NaviGate used a Dell Vostro P71F laptop to process data captured with the P1 camera. They processed their viDoc data with PIX4Dcloud and PIX4Dmapper, while the drone data was processed on PIX4Dmapper.

Once processing was complete, the NaviGate team started comparing the results, including the level of detail.

For the ground sampling distance (the GSD, which is how much distance in reality the space between two pixels represents), the P1 dataset rendered a result of 0.91 cm. The accuracy was rendered using check points set with the total station (measurements taken with the Focus 35). The 3D models made with the viDoc + iPhone and the XIAOMI had a GSD of 0.2cm. This makes sense as the mobile devices were much closer to the target objects, and a smaller GSD value means there is more detail. The P1’s GSD is remarkably precise for a drone flying at an altitude of 80 m but is still lower than terrestrial scanners in this example.

The NaviGate team had set 15 targets from each dataset to compare with GNSS data gathered with the total station. All 15 of these targets were compared and there were minor differences between the coordinates measured with the Focus 35 total station and the drone/mobile workflows.

The RMSE square error for the drone and viDoc measurements were plus/minus 2cm in the X,Y, and Z axis. This means that measurements made based on these datasets meet the Group 1 standard required in Polish law. For reference, the Bureau Veritas has certified the viDoc RTK rover for Class A measurements (accurate to within 5 cenitmeters).

The Xiaomi, with no RTK, was correct to within 5 centimeters when measuring objects that were 2 meters away. This inaccuracy could be eliminated or mitigated with the use of GCPs or specific checkpoints. These results highlighted the straightforward workflow of the viDoc as it was more accurate and did not require any further steps to ensure that accuracy, unlike the the GCPs the Xiamoi would need.

Choosing between aerial and terrestrial photogrammetry

The team from NaviGate saw they had high levels of detail for both forms of photogrammetry. The aerial imagery and data from the P1 camera and drone produced an accurate GSD despite the high flight altitude. However, as it was a survey of an individual, single-storey building, the viDoc RTK workflow would likely be a better choice for similar projects. For larger scale surveys, aerial mapping with a drone would be a less labor-intensive choice.

The unique advantages of the viDoc come from its usefulness and versatility. It is a highly adaptable tool that is lightweight and portable, making it easy to transport to a site and use.“Compared to traditional surveying methods, taking advantage of such a versatile device offers great opportunities,” explains Grzegorz Durlo, of NaviGate.

“The value of the equipment will be appreciated by researchers and archaeologists during excavations and reconstruction of parts of objects characterised by high importance for history and culture.”

Recently, LiDAR on mobile devices has been used by clients of NaviGate’s for work including volume measurements for forestry or measuring volumes. With the accuracy of the viDoc, these volume measurements can be used for construction sites or terrestrial surveying work.