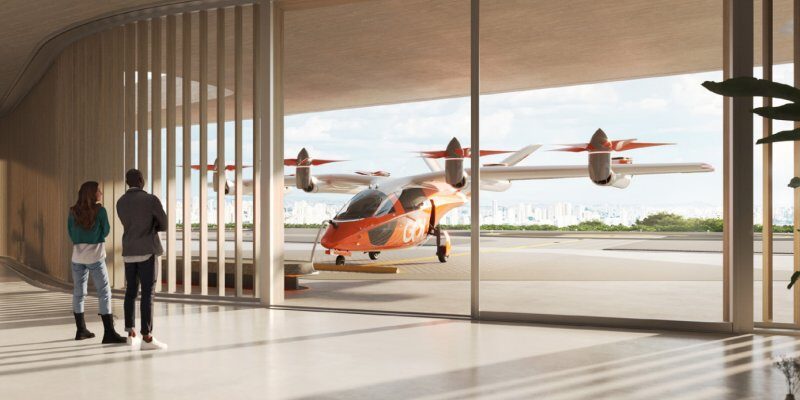 As the technology of eVTOLs, the electric vertical takeoff and landing vehicles, gets closer to becoming a reality, several airlines and air taxi operators have moved from the mere observation of this potential market to a clearer and more strategic position in relation to what will soon represent Advanced Air Mobility (AAM).

It was in this sense that Gol, one of the main Brazilian airlines, decided in 2021 to enter this market for good, when it announced, together with Grupo Comporte, its intention to acquire and/or lease 250 eVTOLs of the VX4 model from the British manufacturer Vertical Aerospace – the agreement was made with the traditional leasing company of the aeronautical market Avolon.

Since then, the airline has not detailed how and where it intends to operate these aircraft. The only clue that was given is that the focus will be on large urban centers, with operations starting in the region of São Paulo, known for heavy helicopter traffic and which has the two busiest airports in Brazil: Congonhas and Guarulhos.

The expectation is that Gol will integrate the network of flights with planes with routes in cities carried out with eVTOLs. In this way, it could offer the customer a service that goes virtually door-to-door. The company can also bet on short trips with eVTOLs, in the same way that helicopter operators currently do.

To carry out the plans, Gol will need to have a structure on the ground capable of handling so many eVTOLs. With that in mind, it expanded its partnerships with Vertical Aerospace, Grupo Comporte and Avolon with the arrival of Corporación América Airports to this consortium.

This group is the world’s largest operator of private sector airports by number of terminals. There are 56 spread across six countries. In Brazil, it is part of the consortium that manages the airports of Brasília and São Gonçalo do Amarante, in Rio Grande do Norte. In South America, it is also present in Argentina, Ecuador and Uruguay.

The entry of Corporación América Airports closes a gap that Gol was missing, which is the operating structure, that is, the vertiports. In this partnership, the design and locations of the vertiports will be defined, as well as other structures necessary for the operation of the eVTOLs, such as the supply of energy for aircraft charging and the possibilities of integration with other modes, including air.

At the same time, Gol awaits progress in the development of Vertical Aerospace’s VX4. Last September, the eVTOL performed the first test flight and began the test campaign to seek certification of the aircraft at the Civil Aviation Authority of the United Kingdom (CAA) and also at the European Agency for Safety of Aviation (EASA) by 2025.

Gol has also been working with the Brazilian National Civil Aviation Agency (ANAC) to verify the viability of VX4 certification in Brazil. According to ANAC professionals, the agency has been constantly meeting with foreign aeronautical authorities, including those from Europe, to facilitate the certification of eVTOL models from other countries.

The VX4 is an eVTOL with capacity for four passengers and one pilot and designed to reach 160 kilometers at a speed of up to 320 km/h. In addition, the noise generated by the aircraft is 100 times less than that of a helicopter in a cruise flight and 30 times less during takeoff and landing procedures.

The aspect related to the environment, by the way, is another reason that led Gol to bet on eVTOLs. With the aeronautical sector committed to reducing greenhouse gas emissions, one of the ways to get there is to use more sustainable aircraft. This is clearly the case of the eVTOLs, which were born with this proposal, which is in line with Gol’s plan to achieve carbon neutrality by 2050.