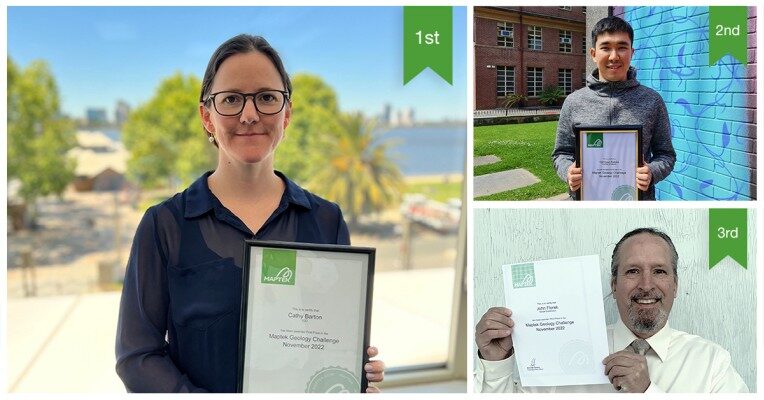 Barton had been intrigued that she and a geology colleague interpreted alternative orientations for pegmatite intrusions despite working on the same data. She also hoped to gain insights into the uncertainty of the location and thickness of the pegmatites.

The Maptek challenge provides entrants with access to Vulcan GeologyCore and DomainMCF software, with unlimited machine learning cloud computing access across one week, to come up with novel ways of maximising project value.

Barton, who won a batch of DomainMCF hours for her company alongside a personal prize, said finding a simple solution in DomainMCF made it practical to produce alternatives quickly, boosting confidence in existing models and highlighting areas needing review.

Barton described her data as ‘distressingly real’, comprising 1885 diamond holes drilled from surface and underground in widely varying orientations and directions by multiple owners over 30 years. Drillhole spacing ranged from 100 m with no sign of economic mineralisation to 15 m in some mineralised areas.

With domains categorised and data validated, the job was submitted to DomainMCF using the lithological grouping as the domain and six elements to estimate grade trends.

Within 30 minutes and 45 seconds DomainMCF produced an alternative geological model that honoured the drilling data and correlated well with the implicit model.

Barton appreciated that DomainMCF can be used as a validation tool for geological modelling, for example, highlighting areas where a vein model may be incorrect due to the modeller’s interpretation of the orientation. She also noted that DomainMCF helped in modelling intricate isoclinal folding as well as large regional faults.

Abildin noted the main advantages to be the ‘stunning’ speed of cloud computing and user-friendly domaining tools.

‘Vulcan GeologyCore had several utilities that as a non-geologist I had not previously considered. DomainMCF produced the result extremely fast – the run time exceeded my expectations by around ten times,’ Abildin said.

‘The interconnection between Maptek products is beneficial. It is easy to open the block model produced by DomainMCF in Vulcan and then analyse the results against previous model,’ he said.

Third prize was awarded to John Florek, Principal of Apical Exploration, who ran DomainMCF on a series of diamond drillholes for a high-grade gold deposit, to see whether incorporating different geological trends and categorising them as a domain variable gives more geological control over the model.

‘The Maptek solution allowed a fresh new perspective to the deposit that we will be exploring. Trends that were not identified, revealed themselves,’ Florek commented.

The performance of DomainMCF and Vulcan GeologyCore surprised Florek also.

‘The time it took to do these sophisticated models was amazing. It would take geologists years to develop comparable models, Florek said.

Florek commented favourably on the ability to model domains with known structural controls for mineralisation, noting that it allowed him to create several models, and test them during exploration drilling.

Additional benefits for projects include quick evaluation of known deposits without the bias of earlier workers.

‘I could independently evaluate whether a property has higher or lower potential than what is being promoted. It’s a great tool for institutional investors.’

Maptek Senior Technical Lead Richard Jackson was impressed with the breadth of applications from entrants in this year’s Challenge.

‘The three winning submissions are great examples of how DomainMCF can be applied to very different problems, all gaining a little more insight into their data and adding value to the vastly different problems being tackled. It truly was a challenge of more than just domains!’ Jackson said.