New research, both in the ocean and in the largest-ever laboratory experiments, has investigated internal waves and solved a longstanding mystery about exactly how the largest known internal waves, in the South China Sea, are produced. The new findings come from a team effort involving MIT and several other institutions, and coordinated by the Office of Naval Research (ONR). 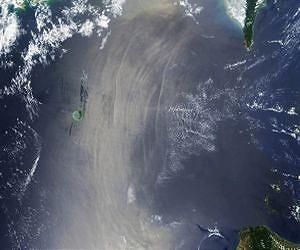 “These waves are potentially the key mechanism for transferring heat from the upper ocean to the depths. So the focus of the research was to determine exactly how the largest of these waves, as revealed through satellite imagery of the Luzon Strait region, are generated,” said Thomas Peacock, an associate professor of mechanical engineering at MIT. Among the new techniques that have helped to propel the study forward is the use of satellite data. While the submerged waves raise the surface of the water by less than an inch, long-term satellite data can clearly discern this difference. “From 15 years of data, you can filter out the noise. Many locations, such as the Luzon Strait, generate these waves in a steady, predictable way as tides flow over submerged ridges and through narrow channels. A resulting 12-hour periodicity is visible in satellite data,” added Peacock.