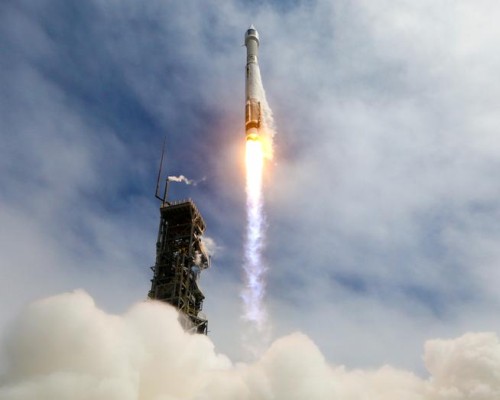 The most advanced commercial imagery satellite ever built is now safely in orbit, carrying industry-leading capabilities to see through smoke, detect objects as small as a dinner plate and determine what natural resources might lie beneath Earth’s surface.

This new bird, WorldView-3, gives its owner, Longmont-based DigitalGlobe, the breathing room needed to maintain its competitive lead in an arena that governments, companies and everyday users are quickly growing dependent on.

A lead they have lengthened — at least for now.

“We believe we have a 10-year technological lead on our nearest competitor,” DigitalGlobe CEO Jeffrey Tarr told The Denver Post. “Think about that another way: The clarity and resolution of this satellite is 10 times more powerful than any of the new players in our space.”

WorldView-3 is the first satellite to launch since the U.S. Department of Commerce’s landmark decision to ease the federal restrictions on resolution level of space-based commercial imagery.

Virginia-based Exelis designed WorldView-3’s optics system with the unprecedented ability to peer down on Earth’s objects that are as small as 31-centimeters, or about a foot across.

Where DigitalGlobe was previously throttled at 50-centimeter resolution over privacy and security concerns, the government cleared industry in Juneto sell images that reveal 25-centimeter-wide details on Earth’s surface.

Tarr anticipates as much as $400 million in new business has opened up with this decision and expects its first customers of WorldView-3’s deep-probing images will be the U.S. government and its allies.

“Quickly behind that, we expect adoption from a number of large, well-known consumer website companies that will allow others to see this imagery,” he said. “Google is one of our customers, and just about every provider of Internet-based maps is a customer of ours. And we expect them to be early buyers of our 30-centimeter imagery.”

The satellite, roughly the size of a small RV, was built by Boulder-based Ball Aerospace & Technologies Corp. and launched by Centennial-based United Launch Alliance without delay during its launch window.

From its location nearly 382 miles up, the satellite is now able to return pictures of a baseball game that clearly shows home plate and how many players are on the field.

But the company hopes — and needs — Wednesday’s launch of WorldView-3 to be about more than just pretty photos. The satellite returns 4 terabytes of data every day. Without analysis, the raw data can be overwhelming and not useful information.

“I won’t say this will automatically create a boon for the company. At a certain point, you aren’t really gaining new market share unless you are creating new applications,” said Marco Caceres, a senior space analyst with Teal Group.

That is why DigitalGlobe’s leadership has begun shifting its business focus on what it calls “geospatial big data,” or usable insight that is gleaned from its powerful viewpoint from space.

Ball Aerospace built a new tool on this satellite that is capable of reading soil composition to tell users what natural resources could be beneath the surface at different locations.

Another instrument is about to see through hazy skies and smoke, which can be used to see where new hot spots are flaring up in the hopes of containing wildfires and saving firefighters’ lives.

“This is a satellite that will make a big difference for our country and this world,” Tarr said. “We are building a business in Colorado that is maniacal about our vision and purpose, which is seeing a better world, and WorldView-3 is a giant leap forward.”

And while DigitalGlobe is breathing a sigh of relief for a successful launch of its 6,200-pound spacecraft, the leadership is staying on the offense.

Tarr announced during its earnings call two weeks ago that the company is hastening the launch of its next high-resolution satellite, WorldView-4, now scheduled for 2016.

“There’s a window of opportunity here until the next company comes up with something comparable,” Caceres said.

“This is by no means the end of advances in technology.”