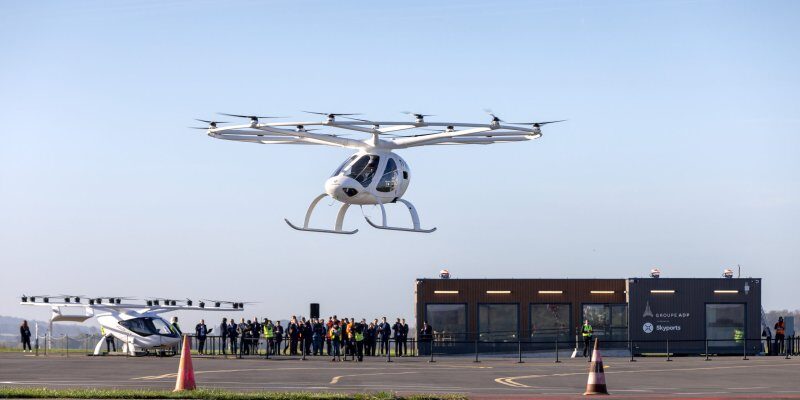 Volocopter, Skyports and Groupe ADP inaugurated Europe’s first fully integrated vertiport terminal for eVTOLs. Built at Pontoise-Cormeilles airfield, in the Paris region, the terminal begins a new stage in the development of an Urban Air Mobility (UAM) ecosystem, already foreseeing the start of commercial operations at the 2024 Olympics, in Paris.

he fully integrated testbed at Pontoise-Cormeilles enables a variety of stakeholders to test technologies and procedures in diverse configurations in a real-life environment. The opportunity to test on a live airfield is both invaluable and essential to the development of the entire industry.

The testbed at Pontoise-Cormeilles, designed by Skyports in collaboration with Groupe ADP, is aircraft agnostic and offers the entire ecosystem the chance to test and develop their technologies. Most importantly, it facilitates collaboration between the key ecosystem partners, including technology pioneers, regulators and local partners such as the French Civil Aviation Authority (DGAC), suppliers and airlines.

It will enable the testing of:

A model of the VoloCity, which is being developed as Volocopter’s first certified aircraft for commercial services, was featured at the launch in addition to a crewed test flight of the 2X model – the only aircraft currently authorised by DGAC for eVTOL test flights in France.

The series of demonstrations by Skyports and Volocopter also featured displays of flight monitoring capabilities and digital operating systems, including Skyports’ vertiport operating systems and the VoloIQ.

According to the Groupe ADP, the plan is that by 2024 five more vertiports will be implemented in the Paris region, with some lines with passengers:

For this operation, Groupe ADP and Volocopter intend to use a fleet of ten eVTOLs of the VoloCity model, flying an average of two to three hours a day.

“Introducing a new kind of mobility like UAM can only be done successfully with a closely knit, yet open ecosystem. The testbed at Pontoise-Cormeilles is a stellar example of ecosystem partners collaborating to accelerate the realization of UAM. We can test processes, integrate new and old systems, and simulate different operational scenarios to create trust and positive awareness of all stakeholders. Together, we will succeed in providing an additional emission-free transport option for the public. Every test is one step closer to commercialization in time for 2024.”